What Are the First Principles of Innovation? 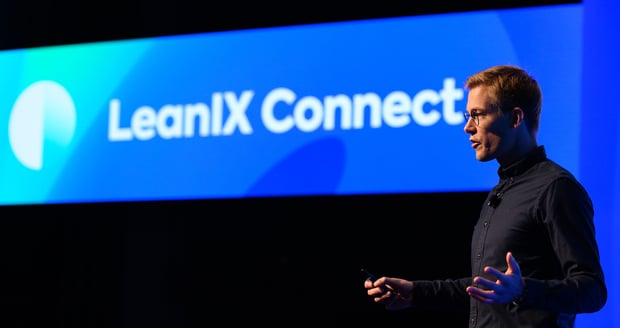 When LeanIX CEO André Christ kicked off the LeanIX Connect Summit Americas 2022, he shared a few thoughts on the event’s theme: Innovation for the Always-On Enterprise.

The world is swimming in innovation today. As just one example, André cited adidas’ journey into the metaverse with Bored Ape Yacht Club last year. Reportedly, the campaign’s NFT drop netted collaborators over $22 million. Clearly, rapidly building a campaign around this multi-layered innovation paid dividends to all involved.

Unfortunately, that’s not always how things go when companies try to innovate. Consider a recent McKinsey finding that 84% of CEOs believe innovation is critical to growth, but only 6% are satisfied with company performance when it comes to innovation. What explains this disconnect?

As André’s metaverse example highlighted, innovation can seem very complicated. Forget about the immense complexity of creating a parallel, virtual universe; the blockchain technology behind NFTs brings with it a complexity all its own. In the face of this complexity, it’s easy to see how CEOs might believe their companies are falling far short of their innovation goals.

To offer a different perspective, André asked the audience to take a step back and think differently about innovation.

Instead of seeing innovation as something inherently complex that only geniuses can achieve, André proposed three principles that he saw as the key to innovation: Standardization, simplification, and collaboration.

At first blush, standardization might seem like the opposite of innovation. After all, how innovative can a standard be?

Well, consider the lowly fire hydrant. Before standardization, in 1904, it’s estimated there were 600 variations of fire hose and hydrant couplings in the US alone. When a massive fire broke out in Baltimore that year, more than 1500 buildings burned because, despite the massive turnout of firefighters from surrounding communities, none of them could connect their hoses to Baltimore’s hydrants.

In this case, creating a standard was a life-saving innovation

Standards allow you to focus on what matters. In this way, they enable innovation.

One example that André mentioned from LeanIX’s product portfolio was our out-of-the-box data model. Companies can spend (and waste) a lot of time refining the data model they want to use to organize their IT landscape. We created a data model, based on experience and best practice, that just works. It’s one of the reasons organizations can get up and running with LeanIX so quickly: they don’t have to reinvent the wheel or burn time and money with costly customizations.

On this last note, it’s important to emphasize that customization is a trap. By optimizing around a specific need at a specific moment in time, companies create a long tail of technical debt. Standardization helps you avoid this trap, allowing you to invest in innovation, not in maintaining and updating customizations on into the future.

The next principle of innovation that André mentioned was simplification.

IT landscapes are complex and only growing more complex. To give you a taste of what that means, one of our clients recently told me that his company tracks over 23,000 dependencies in LeanIX. Managing that level of complexity calls for a tool that is simple to use.

Standardizing our data model could be seen as one way to simplify things. Another approach we have taken is to focus on usability. Since we started out to create an EA tool for everybody, we had to create a user interface that everyone could use. So, we did.

We also realized that eliminating manual work was a path to simplification. For this reason, we have focused on ease of integration with other tools and, wherever possible, automating processes, such as pulling in data or pushing it other systems when necessary.

Simplification, like standardization, saves time and reduces waste. By making the tool more usable, we made it more useful. The result: people use the tool. (Some would argue that creating an EA tool used by the business was itself a real innovation!)

One could look at the principles of innovation that André shared as myth busters.

First, there’s the myth that innovation doesn’t involve standardization. It can and does.

Second, there’s the myth that innovations have to be as complicated as self-driving cars or quantum computers. On the contrary. Some of the most powerful innovations have actually involved simplification.

The final myth is that of the solitary, innovative genius. Yes, sometimes a genius comes along and changes everything. More often than not, however, innovation turns out to be a team sport, one that requires a great deal of collaboration.

In his presentation, André was quick to point out that collaboration doesn’t mean scheduling a lot of meetings to align different teams. As he put it, in software as in business, taking time to synchronize things slows everything down.

Real collaboration isn't just coordinated activity. It's about working together. Innovation facilitates this. It facilitates collaboration by creating a common language allowing people to collaborate across functions and disciplines. We have found that business capabilities can serve as this common language, making it possible for the business and IT to understand each other and work towards mutual goals.

A common language is a connector. That's why making it easy to connect things is also innovative. The fact of the matter is, companies today don’t want monolithic tools that can do everything, but only some of it well. Instead, companies have increasingly adopted a best-in-breed approach to technology.

Meeting this customer requirement calls for two things. First, open APIs so that your technology can easily communicate with other technologies. Second, it calls for a healthy ecosystem of partners working together to solve problems for customers in the most efficient way possible.

A great example of this is the partnership between SAP and LeanIX André announced during his keynote. The close, years-long collaboration between LeanIX and SAP Signavio provided the foundation for this partnership.

In other words, innovation doesn't mean thinking up and building everything yourself. Instead, it means focusing on what you do best and then making it as easy as possible to connect to solutions and partners doing what they do best.

Innovation doesn’t have to be complicated

As André pointed out in his talk, we are living in intense times. Just as we emerge from a global pandemic, we face war in Europe, rising inflation, an intensifying climate crisis, and the specter of economic downturn. In order to adapt and evolve – to continuously transform – companies must innovate.

But innovation does not mean that you have to create a lifelike robot capable of performing surgery and traveling to Mars. Instead, it means looking for opportunities to standardize, simplify, and collaborate.

Interestingly, as André noted, game-changing innovations don’t even have to be technical. As an example, he cited LeanIX’s commercial model. Unlike other tools, LeanIX does not charge by the user. We charge by the number of applications being managed through the tool.

By making this our standard pricing model, we eliminated the need for protracted negotiations over licenses. Because our customers don’t have to worry about license constraints, it simplifies the usage of the tool. If someone needs access, they get it.

Best of all, this model encourages and facilitates collaboration. It’s not only a win-win-win; it's also an illustration of how these first principles of innovation can be practically applied.

If you would like to watch André’s keynote in its entirety, you can do so here. [Free registration required].

If You Have yet to Think About Microservices, You Are Already Behind

Giving Businesses What They Want: Data-Driven Architecture with André Christ, CEO of LeanIX